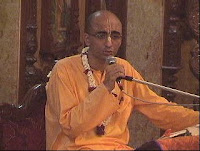 
Translation:
My dear King, the original Supreme Personality of Godhead, dressed in yellow garments and bearing a conchshell, disc, club and lotus in His four hands, then appeared before Aditi.


Translation:
When the Supreme Personality of Godhead became visible to Aditi's eyes, Aditi was so overwhelmed by transcendental bliss that she at once stood up and then fell to the ground like a rod to offer the Lord her respectful obeisances.


Translation:
Aditi stood silently with folded hands, unable to offer prayers to the Lord. Because of transcendental bliss, tears filled her eyes, and the hairs on her body stood on end. Because she could see the Supreme Personality of Godhead face to face, she felt ecstasy, and her body trembled.


Translation:
O Maharaja Pariksit, the demigoddess Aditi then began offering her prayers to the Supreme Personality of Godhead in a faltering voice and with great love. She appeared as though drinking through her eyes the Supreme Lord, who is the husband of the goddess of fortune, the enjoyer of all sacrificial ceremonies, and the master and Lord of the entire universe.

Purport:
After observing the payo-vrata, Aditi was certain that the Lord had appeared before her as Rama-pati, the husband of all good fortune, just to offer her sons all opulences. She had performed the yajña of payo-vrata under the direction of her husband, Kasyapa, and therefore she thought of the Lord as Yajña-pati. She was completely satisfied to see the master and Lord of the entire universe come before her to fulfill her desire.


Translation:
The goddess Aditi said: O master and enjoyer of all sacrificial ceremonies, O infallible and most famous person, whose name, when chanted, spreads all good fortune! O original Supreme Personality of Godhead, supreme controller, shelter of all holy places, You are the shelter of all poor, suffering living entities, and You have appeared to diminish their suffering. Please be kind to us and spread our good fortune.

Purport:
The Supreme Personality of Godhead is the master of those who observe vows and austerities, and it is He who bestows benedictions upon them. He is worshipable for the devotee throughout the devotee's life, for He never breaks His promises. As He says in Bhagavad-gita (9.31), kaunteya pratijanihi na me bhaktah pranasyati: "O son of Kunti, declare it boldly that My devotee never perishes." The Lord is addressed here as acyuta, the infallible, because He takes care of His devotees. Anyone inimical to the devotees is certainly vanquished by the mercy of the Lord. The Lord is the source of the Ganges water, and therefore He is addressed here as tirtha-pada, indicating that all the holy places are at His lotus feet, or that whatever He touches with His foot becomes a holy place. Bhagavad-gita, for example, begins with the words dharma-ksetre kuru-ksetre [Bg. 1.1]. Because the Lord was present on the Battlefield of Kuruksetra, it became a dharma-ksetra, a place of pilgrimage. Therefore the Pandavas, who were extremely religious, were assured of victory. Any place where the Supreme Personality of Godhead displays His pastimes, such as Vrndavana or Dvaraka, becomes a holy place. The chanting of the holy name of the Lord Hare Krsna, Hare Krsna, Krsna Krsna, Hare Hare/ Hare Rama, Hare Rama, Rama Rama, Hare Hare is pleasing to the ear, and it expands good fortune to the audience who hears it chanted. Owing to the presence of the Supreme Personality of Godhead, Aditi was fully assured that the troublesome condition created for her by the demons would now be ended.
at April 23, 2010