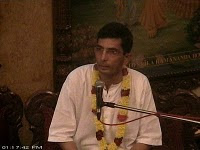 Translation:
O unlimited one, if Your Lordship is satisfied, one can very easily obtain a lifetime as long as that of Lord Brahma, a body either in the upper, lower or middle planetary systems, unlimited material opulence, religion, economic development and satisfaction of the senses, full transcendental knowledge, and the eight yogic perfections, what to speak of such petty achievements as conquering one's rivals.


Translation:
Sukadeva Gosvami said: O King Pariksit, best of the Bharata dynasty, when the lotus-eyed Lord, the Supersoul of all living entities, was thus worshiped by Aditi, He replied as follows.

Translation:
The Supreme Personality of Godhead said: O mother of the demigods, I have already understood your long-cherished desires for the welfare of your sons, who have been deprived of all opulences and driven from their residence by their enemies.

Purport:
The Supreme Personality of Godhead, being situated in everyone's heart, and especially in the hearts of His devotees, is always ready to help devotees in adversity. Since He knows everything, He knows how things are to be adjusted, and He does the needful to relieve the suffering of His devotee.


Translation:
O Devi, O goddess, I can understand that you want to regain your sons and be together with them to worship Me, after defeating the enemies in battle and retrieving your abode and opulences.


Translation:
You want to see the wives of the demons lamenting for the death of their husbands when those demons, the enemies of your sons, are killed in battle by the demigods, of whom Indra is the chief.


Translation:
You want your sons to regain their lost reputation and opulence and live again on their heavenly planet as usual.

Translation:
O mother of the demigods, in My opinion almost all the chiefs of the demons are now unconquerable, for they are being protected by brahmanas, whom the Supreme Lord always favors. Thus the use of power against them now will not at all be a source of happiness.

Purport:
When a person is favored by brahmanas and Vaisnavas, no one can defeat him. Even the Supreme Personality of Godhead does not interfere when one is protected by a brahmana. It is said, go-brahmana-hitaya ca. The Lord's first inclination is to give all benedictions to the cows and brahmanas. Therefore if brahmanas favor someone, the Lord does not interfere, nor can anyone interfere with the happiness of such a person.