The Lord Is Vibhu And We Are Anu 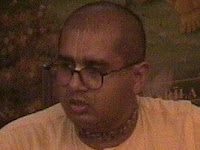 2010-04-30
Srimad Bhagavatam 08.18.01 - The Lord Is Vibhu And We Are Anu (download mp3)
by Radhadyuti Prabhu at ISKCON Chowpatty
www.iskcondesiretree.net

Translation:
Sukadeva Gosvami said: After Lord Brahma had thus spoken, glorifying the Supreme Lord's activities and prowess, the Supreme Personality of Godhead, who is never subject to death like an ordinary living being, appeared from the womb of Aditi. His four hands were decorated with a conchshell, club, lotus and disc, He was dressed in yellow garments, and His eyes appeared like the petals of a blooming lotus.

Purport:
The word amrta-bhuh is significant in this verse. The Lord sometimes appears like an ordinary child taking birth, but this does not mean that He is subject to birth, death or old age. One must be very intelligent to understand the appearance and activities of the Supreme Lord in His incarnations. This is confirmed in Bhagavad-gita (4.9): janma karma ca me divyam evam yo vetti tattvatah. One should try to understand that the Lord's appearance and disappearance and His activities are all divyam, or transcendental. The Lord has nothing to do with material activities. One who understands the appearance, disappearance and activities of the Lord is immediately liberated. After giving up his body, he never again has to accept a material body, but is transferred to the spiritual world (tyaktva deham punar janma naiti mam eti so 'rjuna [Bg. 4.9]).