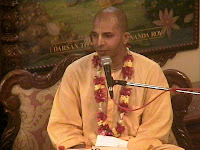 
Translation:
The body of the Supreme Personality of Godhead, blackish in complexion, was free from all inebrieties. His lotus face, decorated with earrings resembling sharks, appeared very beautiful, and on His bosom was the mark of Srivatsa. He wore bangles on His wrists, armlets on His arms, a helmet on His head, a belt on His waist, a sacred thread across His chest, and ankle bells decorating His lotus feet.


Translation:
An uncommonly beautiful garland of flowers decorated His bosom, and because the flowers were extremely fragrant, a large group of bees, making their natural humming sounds, invaded them for honey. When the Lord appeared, wearing the Kaustubha gem on His neck, His effulgence vanquished the darkness in the home of the Prajapati Kasyapa.


Translation:
At that time, there was happiness in all directions, in the reservoirs of water like the rivers and oceans, and in the core of everyone's heart. The various seasons displayed their respective qualities, and all living entities in the upper planetary system, in outer space and on the surface of the earth were jubilant. The demigods, the cows, the brahmanas and the hills and mountains were all filled with joy.


Translation:
On the day of Sravana-dvadasi [the twelfth day of the bright fortnight in the month of Bhadra], when the moon came into the lunar mansion Sravana, at the auspicious moment of Abhijit, the Lord appeared in this universe. Considering the Lord's appearance very auspicious, all the stars and planets, from the sun to Saturn, were munificently charitable.

Purport:
Srila Visvanatha Cakravarti Thakura, an expert astrologer, explains the word naksatra-taradyah. The word naksatra means "the stars," the word tara in this context refers to the planets, and adyah means "the first one specifically mentioned." Among the planets, the first is Surya, the sun, not the moon. Therefore, according to the Vedic version, the modern astronomer's proposition that the moon is nearest to the earth should not be accepted. The chronological order in which people all over the world refer to the days of the week Sunday, Monday, Tuesday, Wednesday, Thursday, Friday and Saturday corresponds to the Vedic order of the planets and thus circumstantiates the Vedic version. Apart from this, when the Lord appeared the planets and stars became situated very auspiciously, according to astrological calculations, to celebrate the birth of the Lord.
at May 01, 2010