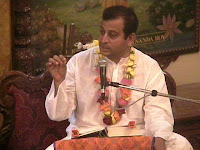 
Translation:
The Supreme Personality of Godhead, who is very merciful to the poor, will fulfill all of your desires, for devotional service unto Him is infallible. Any method other than devotional service is useless. That is my opinion.

Purport:
There are three kinds of men, who are called akama, moksa-kama and sarva-kama. One who tries to get liberation from this material world is called moksa-kama, one who wants to enjoy this material world to its fullest extent is called sarva-kama, and one who has fulfilled all his desires and has no further material desires is called akama. A bhakta has no desire. Sarvopadhi-vinirmuktam tat-paratvena nirmalam [Cc. Madhya 19.170]. He is purified and free from material desires. The moksa-kami wants to achieve liberation by merging into the existence of the Supreme Brahman, and because of this desire to merge into the existence of the Lord, he is not yet pure. And since those who want liberation are impure, what to speak of the karmis, who have so many desires to fulfill? Nonetheless, the sastra says:

"Whether one desires everything or nothing or desires to merge into the existence of the Lord, he is intelligent only if he worships Lord Krsna, the Supreme Personality of Godhead, by rendering transcendental loving service." (SB 2.3.10)

Kasyapa Muni saw that his wife, Aditi, had some material desires for the welfare of her sons, but still he advised her to render devotional service to the Supreme Personality of Godhead. In other words, everyone, regardless of whether he is a karmi, jñani, yogi or bhakta, should invariably take shelter of the lotus feet of Vasudeva and render transcendental loving service unto Him so that all his desires will be duly fulfilled. Krsna is dina-anukampana: He is very merciful to everyone. Therefore if one wants to fulfill his material desires, Krsna helps him. Of course, sometimes if a devotee is very sincere, the Lord, as a special favor to him, refuses to fulfill his material desires and directly blesses him with pure, unalloyed devotional service. It is said in Caitanya-caritamrta (Madhya 22.38-39):

"Krsna says, 'If one engages in My transcendental loving service but at the same time wants the opulence of material enjoyment, he is very, very foolish. Indeed, he is just like a person who gives up ambrosia to drink poison. Since I am very intelligent, why should I give this fool material prosperity? Instead I shall induce him to take the nectar of the shelter of My lotus feet and make him forget illusory material enjoyment.' " If a devotee maintains some material desire and at the same time very sincerely desires to engage at the lotus feet of Krsna, Krsna may directly give him unalloyed devotional service and take away all his material desires and possessions. This is the Lord's special favor to devotees. Otherwise, if one takes to Krsna's devotional service but still has material desires to fulfill, he may become free from all material desires, as Dhruva Maharaja did, but this may take some time. However, if a very sincere devotee wants only Krsna's lotus feet, Krsna directly gives him the position of suddha-bhakti, unalloyed devotional service.
at April 08, 2010