Mind Carries Us To Our Next Destination 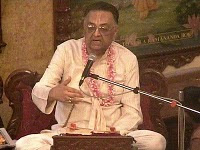 2010-05-02
Srimad Bhagavatam 08.18.06-12 - Mind Carries Us To Our Next Destination (download mp3)
by Shreenathji Prabhu at ISKCON Chowpatty
www.iskcondesiretree.net

Translation:
O King, when the Lord appeared on dvadasi, the twelfth day of the moon the sun was at the meridian, as every learned scholar knows. This dvadasi is called Vijaya.


Translation:
Conchshells, kettledrums, drums, panavas and anakas vibrated in concert. The sound of these and various other instruments was tumultuous.


Translation:
Being very pleased, the celestial dancing girls [Apsaras] danced in jubilation, the best of the Gandharvas sang songs, and the great sages, demigods, Manus, Pitas and fire gods offered prayers to satisfy the Lord.

Translation:
The Siddhas, Vidyadharas, Kimpurusas, Kinnaras, Caranas, Yaksas, Raksasas, Suparnas, the best of serpents, and the followers of the demigods all showered flowers on Aditi's residence, covering the entire house, while glorifying and praising the Lord and dancing.

Translation:
When Aditi saw the Supreme Personality of Godhead, who had appeared from her own womb, having accepted a transcendental body by His own spiritual potency, she was struck with wonder and was very happy. Upon seeing the child, Prajapati Kasyapa exclaimed, "Jaya! Jaya!" in great happiness and wonder.


Translation:
The Lord appeared in His original form, with ornaments and weapons in His hands. Although this ever-existing form is not visible in the material world, He nonetheless appeared in this form. Then, in the presence of His father and mother, He assumed the form of Vamana, a brahmana-dwarf, a brahmacari, just like a theatrical actor.

Purport:
The word natah is significant. An actor changes dress to play different parts, but is always the same man. Similarly, as described in the Brahma-samhita (5.33, 39), the Lord assumes many thousands and millions of forms (advaitam acyutam anadim ananta-rupam adyam purana-purusam). He is always present with innumerable incarnations (ramadi-murtisu kala-niyamena tisthan nanavataram akarod bhuvanesu kintu). Nonetheless, although He appears in various incarnations, they are not different from one another. He is the same person, with the same potency, the same eternity and the same spiritual existence, but He can simultaneously assume various forms. When Vamanadeva appeared from the womb of His mother, He appeared in the form of Narayana, with four hands equipped with the necessary symbolic weapons, and then immediately transformed Himself into a brahmacari (vatu). This means that His body is not material. One who thinks that the Supreme Lord assumes a material body is not intelligent. He has to learn more about the Lord's position. As confirmed in Bhagavad-gita (4.9), janma karma ca me divyam evam yo vetti tattvatah. One has to understand the transcendental appearance of the Lord in His original transcendental body (sac-cid-ananda-vigraha [Bs. 5.1]).
at May 02, 2010