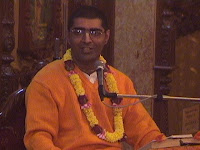 
Translation:
To keep the promise of His father intact, Lord Ramacandra immediately gave up the position of king and, accompanied by His wife, mother Sita, wandered from one forest to another on His lotus feet, which were so delicate that they were unable to bear even the touch of Sita's palms. The Lord was also accompanied by Hanuman [or by another monkey, Sugriva], king of the monkeys, and by His own younger brother Lord Laksmana, both of whom gave Him relief from the fatigue of wandering in the forest. Having cut off the nose and ears of Surpanakha, thus disfiguring her, the Lord was separated from mother Sita. He therefore became angry, moving His eyebrows and thus frightening the ocean, who then allowed the Lord to construct a bridge to cross the ocean. Subsequently, the Lord entered the kingdom of Ravana to kill him, like a fire devouring a forest. May that Supreme Lord, Ramacandra, give us all protection.


Translation:
In the arena of the sacrifice performed by Visvamitra, Lord Ramacandra, the King of Ayodhya, killed many demons, Raksasas and uncivilized men who wandered at night in the mode of darkness. May Lord Ramacandra, who killed these demons in the presence of Laksmana, be kind enough to give us protection.


Translation:
O King, the pastimes of Lord Ramacandra were wonderful, like those of a baby elephant. In the assembly where mother Sita was to choose her husband, in the midst of the heroes of this world, He broke the bow belonging to Lord Siva. This bow was so heavy that it was carried by three hundred men, but Lord Ramacandra bent and strung it and broke it in the middle, just as a baby elephant breaks a stick of sugarcane. Thus the Lord achieved the hand of mother Sita, who was equally as endowed with transcendental qualities of form, beauty, behavior, age and nature. Indeed, she was the goddess of fortune who constantly rests on the chest of the Lord. While returning from Sita's home after gaining her at the assembly of competitors, Lord Ramacandra met Parasurama. Although Parasurama was very proud, having rid the earth of the royal order twenty-one times, he was defeated by the Lord, who appeared to be a ksatriya of the royal order.


Translation:
Carrying out the order of His father, who was bound by a promise to his wife, Lord Ramacandra left behind His kingdom, opulence, friends, well-wishers, residence and everything else, just as a liberated soul gives up his life, and went to the forest with Sita.

Purport:
Maharaja Dasaratha had three wives. One of them, Kaikeyi, served him very pleasingly, and he therefore wanted to give her a benediction. Kaikeyi, however, said that she would ask for the benediction when it was necessary. At the time of the coronation of Prince Ramacandra, Kaikeyi requested her husband to enthrone her son Bharata and send Ramacandra to the forest. Maharaja Dasaratha, being bound by his promise, ordered Ramacandra to go to the forest, according to the dictation of his beloved. And the Lord, as an obedient son, accepted the order immediately. He left everything without hesitation, just as a liberated soul or great yogi gives up his life without material attraction.

Translation:
While wandering in the forest, where He accepted a life of hardship, carrying His invincible bow and arrows in His hand, Lord Ramacandra deformed Ravana's sister, who was polluted with lusty desires, by cutting off her nose and ears. He also killed her fourteen thousand Raksasa friends, headed by Khara, Trisira and Dusana.


Translation:
O King Pariksit, when Ravana, who had ten heads on his shoulders, heard about the beautiful and attractive features of Sita, his mind was agitated by lusty desires, and he went to kidnap her. To distract Lord Ramacandra from His asrama, Ravana sent Marica in the form of a golden deer, and when Lord Ramacandra saw that wonderful deer, He left His residence and followed it and finally killed it with a sharp arrow, just as Lord Siva killed Daksa.


Translation:
When Ramacandra entered the forest and Laksmana was also absent, the worst of the Raksasas, Ravana, kidnapped Sitadevi, the daughter of the King of Videha, just as a tiger seizes unprotected sheep when the shepherd is absent. Then Lord Ramacandra wandered in the forest with His brother Laksmana as if very much distressed due to separation from His wife. Thus He showed by His personal example the condition of a person attached to women.

Purport:
In this verse the words stri-sanginam gatim iti indicate that the condition of a person attached to women was shown by the Lord Himself. According to moral instructions, grhe narim vivarjayet: when one goes on a tour, one should not bring his wife. Formerly men used to travel without conveyances, but still, as far as possible, when one leaves home one should not take his wife with him, especially if one is in such a condition as Lord Ramacandra when banished by the order of His father. Whether in the forest or at home, if one is attached to women this attachment is always troublesome, as shown by the Supreme Personality of Godhead by His personal example.

Of course, this is the material side of stri-sangi, but the situation of Lord Ramacandra is spiritual, for He does not belong to the material world. Narayanah paro 'vyaktat: Narayana is beyond the material creation. Because He is the creator of the material world, He is not subject to the conditions of the material world. The separation of Lord Ramacandra from Sita is spiritually understood as vipralambha, which is an activity of the hladini potency of the Supreme Personality of Godhead belonging to the srngara-rasa, the mellow of conjugal love in the spiritual world. In the spiritual world the Supreme Personality of Godhead has all the dealings of love, displaying the symptoms called sattvika, sañcari, vilapa, murccha and unmada. Thus when Lord Ramacandra was separated from Sita, all these spiritual symptoms were manifested. The Lord is neither impersonal nor impotent. Rather, He is sac-cid-ananda-vigraha [Bs. 5.1], the eternal form of knowledge and bliss. Thus He has all the symptoms of spiritual bliss. Feeling separation from one's beloved is also an item of spiritual bliss. As explained by Srila Svarupa Damodara Gosvami, radha-krsna-pranaya-vikrtir hladini-saktih: the dealings of love between Radha and Krsna are displayed as the pleasure potency of the Lord. The Lord is the original source of all pleasure, the reservoir of all pleasure. Lord Ramacandra, therefore, manifested the truth both spiritually and materially. Materially those who are attached to women suffer, but spiritually when there are feelings of separation between the Lord and His pleasure potency the spiritual bliss of the Lord increases. This is further explained in Bhagavad-gita (9.11):

One who does not know the spiritual potency of the Supreme Personality of Godhead thinks of the Lord as an ordinary human being. But the Lord's mind, intelligence and senses can never be affected by material conditions. This fact is further explained in the Skanda Purana, as quoted by Madhvacarya:

It was actually impossible for Ravana to take away Sita. The form of Sita taken by Ravana was an illusory representation of mother Sita maya-sita. When Sita was tested in the fire, this maya-sita was burnt, and the real Sita came out of the fire.

A further understanding to be derived from this example is that a woman, however powerful she may be in the material world, must be given protection, for as soon as she is unprotected she will be exploited by Raksasas like Ravana. Here the words vaideha-raja-duhitari indicate that before mother Sita was married to Lord Ramacandra she was protected by her father, Vaideha-raja. And when she was married she was protected by her husband. Therefore the conclusion is that a woman should always be protected. According to the Vedic rule, there is no scope for a woman's being independent (asamaksam), for a woman cannot protect herself independently.


Translation:
Lord Ramacandra, whose lotus feet are worshiped by Lord Brahma and Lord Siva, had assumed the form of a human being. Thus He performed the funeral ceremony of Jatayu, who was killed by Ravana. The Lord then killed the demon named Kabandha, and after making friends with the monkey chiefs, killing Vali and arranging for the deliverance of mother Sita, He went to the beach of the ocean.

Purport:
When Ravana kidnapped Sita, he was obstructed on the way by Jatayu, a large bird. But the powerful Ravana defeated Jatayu in the fight and cut his wing. When Ramacandra was searching for Sita, He found Jatayu almost dead and was informed that Sita has been carried off by Ravana. When Jatayu died, Lord Ramacandra did the duty of a son by performing the funeral ceremony, and then He made friends with the monkeys to deliver Sitadevi.