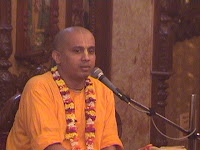 
Translation:
O King Pariksit, when Ravana, who had ten heads on his shoulders, heard about the beautiful and attractive features of Sita, his mind was agitated by lusty desires, and he went to kidnap her. To distract Lord Ramacandra from His asrama, Ravana sent Marica in the form of a golden deer, and when Lord Ramacandra saw that wonderful deer, He left His residence and followed it and finally killed it with a sharp arrow, just as Lord Siva killed Daksa.


Translation:
When Ramacandra entered the forest and Laksmana was also absent, the worst of the Raksasas, Ravana, kidnapped Sitadevi, the daughter of the King of Videha, just as a tiger seizes unprotected sheep when the shepherd is absent. Then Lord Ramacandra wandered in the forest with His brother Laksmana as if very much distressed due to separation from His wife. Thus He showed by His personal example the condition of a person attached to women.

Purport:
In this verse the words stri-sanginam gatim iti indicate that the condition of a person attached to women was shown by the Lord Himself. According to moral instructions, grhe narim vivarjayet: when one goes on a tour, one should not bring his wife. Formerly men used to travel without conveyances, but still, as far as possible, when one leaves home one should not take his wife with him, especially if one is in such a condition as Lord Ramacandra when banished by the order of His father. Whether in the forest or at home, if one is attached to women this attachment is always troublesome, as shown by the Supreme Personality of Godhead by His personal example.

Of course, this is the material side of stri-sangi, but the situation of Lord Ramacandra is spiritual, for He does not belong to the material world. Narayanah paro 'vyaktat: Narayana is beyond the material creation. Because He is the creator of the material world, He is not subject to the conditions of the material world. The separation of Lord Ramacandra from Sita is spiritually understood as vipralambha, which is an activity of the hladini potency of the Supreme Personality of Godhead belonging to the srngara-rasa, the mellow of conjugal love in the spiritual world. In the spiritual world the Supreme Personality of Godhead has all the dealings of love, displaying the symptoms called sattvika, sañcari, vilapa, murccha and unmada. Thus when Lord Ramacandra was separated from Sita, all these spiritual symptoms were manifested. The Lord is neither impersonal nor impotent. Rather, He is sac-cid-ananda-vigraha [Bs. 5.1], the eternal form of knowledge and bliss. Thus He has all the symptoms of spiritual bliss. Feeling separation from one's beloved is also an item of spiritual bliss. As explained by Srila Svarupa Damodara Gosvami, radha-krsna-pranaya-vikrtir hladini-saktih: the dealings of love between Radha and Krsna are displayed as the pleasure potency of the Lord. The Lord is the original source of all pleasure, the reservoir of all pleasure. Lord Ramacandra, therefore, manifested the truth both spiritually and materially. Materially those who are attached to women suffer, but spiritually when there are feelings of separation between the Lord and His pleasure potency the spiritual bliss of the Lord increases. This is further explained in Bhagavad-gita (9.11):

One who does not know the spiritual potency of the Supreme Personality of Godhead thinks of the Lord as an ordinary human being. But the Lord's mind, intelligence and senses can never be affected by material conditions. This fact is further explained in the Skanda Purana, as quoted by Madhvacarya:

It was actually impossible for Ravana to take away Sita. The form of Sita taken by Ravana was an illusory representation of mother Sita maya-sita. When Sita was tested in the fire, this maya-sita was burnt, and the real Sita came out of the fire.

A further understanding to be derived from this example is that a woman, however powerful she may be in the material world, must be given protection, for as soon as she is unprotected she will be exploited by Raksasas like Ravana. Here the words vaideha-raja-duhitari indicate that before mother Sita was married to Lord Ramacandra she was protected by her father, Vaideha-raja. And when she was married she was protected by her husband. Therefore the conclusion is that a woman should always be protected. According to the Vedic rule, there is no scope for a woman's being independent (asamaksam), for a woman cannot protect herself independently.