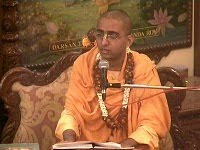 Translation:
Being very sorry, the he-goat, who was subservient to his wife, followed the she-goat on the road and tried his best to flatter her, but he could not pacify her.

Translation:
The she-goat went to the residence of a brahmana who was the maintainer of another she-goat, and that brahmana angrily cut off the he-goat's dangling testicles. But at the he-goat's request, the brahmana later rejoined them by the power of mystic yoga.

Purport:
Here Sukracarya is figuratively described as the husband of another she-goat. This indicates that the relationship between husband and wife in any society, whether higher or lower than human society, is nothing but the same relationship between he-goat and she-goat, for the material relationship between man and woman is one of sex. Yan maithunadi-grhamedhi-sukham hi tuccham [SB 7.9.45]. Sukracarya was an acarya, or expert, in family affairs, which involve the transfer of semen from he-goat to she-goat. The words kascid aja-svami expressly indicate herein that Sukracarya was no better than Yayati, for both of them were interested in family affairs generated by sukra, or semen. Sukracarya first cursed Yayati to become old so that he could no longer indulge in sex, but when Sukracarya saw that Yayati's emasculation would make his own daughter a victim of punishment, he used his mystic power to restore Yayati's masculinity. Because he used his power of mystic yoga for family affairs and not to realize the Supreme Personality of Godhead, this exercise in the magic of yoga was no better than the affairs of he-goats and she-goats. Yogic power should properly be used to realize the Supreme Personality of Godhead. As the Lord Himself recommends in Bhagavad-gita (6.47):

"Of all yogis, he who always abides in Me with great faith, worshiping Me in transcendental loving service, is most intimately united with Me in yoga and is the highest of all."
at April 22, 2011