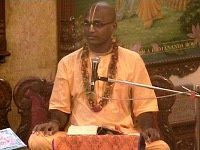 SB 9.18.45
iti pramuditah puruh
pratyagrhnaj jaram pituh
so 'pi tad-vayasa kaman
Translation:
Sukadeva Gosvami said: In this way, O Maharaja Pariksit, the son named Puru was very pleased to accept the old age of his father, Yayati, who took the youth of his son and enjoyed this material world as he required.


Translation:
Thereafter, King Yayati became the ruler of the entire world, consisting of seven islands, and ruled the citizens exactly like a father. Because he had taken the youth of his son, his senses were unimpaired, and he enjoyed as much material happiness as he desired.

Translation:
King Yayati performed various sacrifices, in which he offered abundant gifts to the brahmanas to satisfy the Supreme Lord, Hari, who is the reservoir of all the demigods and the object of all Vedic knowledge.


Translation:
The Supreme Lord, Vasudeva, who created the cosmic manifestation, exhibits Himself as all-pervading, like the sky that holds clouds. And when the creation is annihilated, everything enters into the Supreme Lord, Visnu, and varieties are no longer manifested.

Purport:
As stated by the Lord Himself in Bhagavad-gita (7.19):

"After many births and deaths, he who is actually in knowledge surrenders unto Me, knowing Me to be the cause of all causes and all that is. Such a great soul is very rare." The Supreme Personality of Godhead, Vasudeva, is one with the Supreme Brahman, the Supreme Absolute Truth. Everything is in Him in the beginning, and at the end all manifestations enter into Him. He is situated in everyone's heart (sarvasya caham hrdi sannivistah [Bg. 15.15]). And from Him everything has emanated (janmady asya yatah [SB 1.1.1]). All material manifestations, however, are temporary. The word svapna means "dreams," maya means "illusion," and manoratha means "mental creations." Dreams, illusions and mental creations are temporary. Similarly, all material creation is temporary, but Vasudeva, the Supreme Personality of Godhead, is the eternal Absolute Truth.