Who is a Real Disciple 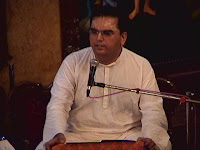 Puru, Yayati's last son, immediately accepted his father's proposal, for although he was the youngest, he was very qualified. Puru thought, "I should have accepted my father's proposal before he asked, but I did not. Therefore I am not a first-class son. I am second class. But I do not wish to become the lowest type of son, who is compared to his father's stool." One Indian poet has spoken of putra and mutra. putra means "son," and mutra means "urine." Both a son and urine come from the same genitals. If a son is an obedient devotee of the Lord he is called putra, or a real son; otherwise, if he is not learned and is not a devotee, a son is nothing better than urine.