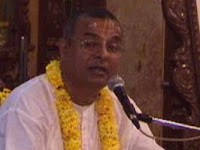 Translation:
The son of Jayadratha was Visada, and his son was Syenajit. The sons of Syenajit were Rucirasva, Drdhahanu, Kasya and Vatsa.

Translation:
The son of Rucirasva was Para, and the sons of Para were Prthusena and Nipa. Nipa had one hundred sons.

Purport:
The Suka mentioned here is different from the Sukadeva Gosvami who spoke Srimad-Bhagavatam. Sukadeva Gosvami, the son of Vyasadeva, is described in great detail in the Brahma-vaivarta Purana. There it is said that Vyasadeva maintained the daughter of Jabali as his wife and that after they performed penances together for many years, he placed his seed in her womb. The child remained in the womb of his mother for twelve years, and when the father asked the son to come out, the son replied that he would not come out unless he were completely liberated from the influence of maya. Vyasadeva then assured the child that he would not be influenced by maya, but the child did not believe his father, for the father was still attached to his wife and children. Vyasadeva then went to Dvaraka and informed the Personality of Godhead about his problem, and the Personality of Godhead, at Vyasadeva's request, went to Vyasadeva's cottage, where He assured the child in the womb that he would not be influenced by maya. Thus assured, the child came out, but he immediately went away as a parivrajakacarya. When the father, very much aggrieved, began to follow his saintly boy, Sukadeva Gosvami, the boy created a duplicate Sukadeva, who later entered family life. Therefore, the suka-kanya, or daughter of Sukadeva, mentioned in this verse is the daughter of the duplicate or imitation Sukadeva. The original Sukadeva was a lifelong brahmacari.

Translation:
Following the instructions of the great sage Jaigisavya, Visvaksena compiled an elaborate description of the mystic yoga system. From Visvaksena, Udaksena was born, and from Udaksena, Bhallata. All these sons are known as descendants of Brhadisu.

Translation:
From Ripuñjaya came a son named Bahuratha. Purumidha was sonless. Ajamidha had a son named Nila by his wife known as Nalini, and the son of Nila was Santi.

Translation:
The son of Santi was Susanti, the son of Susanti was Puruja, and the son of Puruja was Arka. From Arka came Bharmyasva, and from Bharmyasva came five sons Mudgala, Yavinara, Brhadvisva, Kampilla and Sañjaya. Bharmyasva prayed to his sons, "O my sons, please take charge of my five states, for you are quite competent to do so." Thus his five sons were known as the Pañcalas. From Mudgala came a dynasty of brahmanas known as Maudgalya.

Translation:
Mudgala, the son of Bharmyasva, had twin children, one male and the other female. The male child was named Divodasa, and the female child was named Ahalya. From the womb of Ahalya by the semen of her husband, Gautama, came a son named Satananda.

Translation:
The son of Satananda was Satyadhrti, who was expert in archery, and the son of Satyadhrti was Saradvan. When Saradvan met Urvasi, he discharged semen, which fell on a clump of sara grass. From this semen were born two all-auspicious babies, one male and the other female.

Translation:
While Maharaja Santanu was on a hunting excursion, he saw the male and female children lying in the forest, and out of compassion he took them home. Consequently, the male child was known as Krpa, and the female child was named Krpi. Krpi later became the wife of Dronacarya.

Purport:
Thus end the Bhaktivedanta purports of the Ninth Canto, Twenty-first Chapter, of the Srimad-Bhagavatam, entitled "The Dynasty of Bharata."
at June 03, 2011