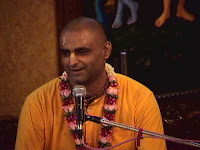 Translation:
Krsna's face is decorated with ornaments, such as earrings resembling sharks. His ears are beautiful, His cheeks brilliant, and His smiling attractive to everyone. Whoever sees Lord Krsna sees a festival. His face and body are fully satisfying for everyone to see, but the devotees are angry at the creator for the disturbance caused by the momentary blinking of their eyes.

Purport:
As stated by the Lord Himself in the Bhagavad-gita (7.3):

"Out of many thousands among men, one may endeavor for perfection, and of those who have achieved perfection, hardly one knows Me in truth." Unless one is qualified to understand Krsna, one cannot appreciate the presence of Krsna on earth. Among the Bhojas, Vrsnis, Andhakas, Pandavas and many other kings intimately related with Krsna, the intimate relationship between Krsna and the inhabitants of Vrndavana is especially to be noted. That relationship is described in this verse by the words nityotsavam na tatrpur drsibhih pibantyah. The inhabitants of Vrndavana especially, such as the cowherd boys, the cows, the calves, the gopis and Krsna's father and mother, were never fully satisfied, although they saw Krsna's beautiful features constantly. Seeing Krsna is described here as nitya-utsava, a daily festival. The inhabitants of Vrndavana saw Krsna almost every moment, but when Krsna left the village for the pasturing grounds, where He tended the cows and calves, the gopis were very much afflicted because they saw Krsna walking on the sand and thought that Krsna's lotus feet, which they dared not place on their breasts because they thought their breasts not soft enough, were being pierced by broken chips of stone. By even thinking of this, the gopis were affected, and they cried at home. These gopis, who were therefore the exalted friends of Krsna, saw Krsna constantly, but because their eyelids disturbed their vision of Krsna, the gopis condemned the creator, Lord Brahma. Therefore the beauty of Krsna, especially the beauty of His face, is described here. At the end of the Ninth Canto, in the Twenty-fourth Chapter, we find a hint of Krsna's beauty. Now we are proceeding to the Tenth Canto, which is considered Krna's head. The entire Srimad-Bhagavata Purana is the embodiment of Krsna's form, and the Tenth Canto is His face. This verse gives a hint of how beautiful His face is. Krsna's smiling face, with His cheeks, His lips, the ornaments in His ears, His chewing of betel nuts—all this was minutely observed by the gopis, who thus enjoyed transcendental bliss, so much so that they were never fully satisfied to see Krsna's face, but instead condemned the creator of the body for making eyelids that obstructed their vision. The beauty of Krsna's face was therefore much more appreciated by the gopis than by His friends the cowherd boys or even by Yasoda Mata, who was also interested in decorating the face of Krsna.
at June 23, 2011