Srila Prabhupada Shares Krishna With Everyone 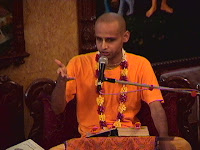 
Translation:
Assisted by the descendants of Bhoja, Vrsni, Andhaka, Madhu, Surasena, Dasarha, Kuru, Srñjaya and Pandu, Lord Krsna performed various activities. By His pleasing smiles, His affectionate behavior, His instructions and His uncommon pastimes like raising Govardhana Hill, the Lord, appearing in His transcendental body, pleased all of human society.

Purport:
The words nrlokam ramayam asa murtya sarvanga-ramyaya are significant. Krsna is the original form. Bhagavan, the Supreme Personality of Godhead, is therefore described here by the word murtya. The word murti means "form." Krsna, or God, is never impersonal; the impersonal feature is but a manifestation of His transcendental body (yasya prabha prabhavato jagad-anda-koti [Bs. 5.40]). The Lord is narakrti, exactly resembling the form of a human being, but His form is different from ours. Therefore the word sarvanga-ramyaya informs us that every part of His body is pleasing for everyone to see. Apart from His smiling face, every part of His body His hands, His legs, His chest is pleasing to the devotees, who cannot at any time stop seeing the beautiful form of the Lord.
at June 22, 2011