Demons Will Vanquish Among Themselves 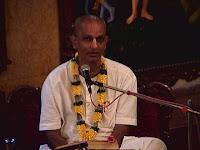 2011-06-18
Srimad Bhagavatam 09.24.59 - Demons Will Vanquish Among Themselves (download mp3)
by Shankhdhari Prabhu at ISKCON Chowpatty
ww.iskcondesiretree.net


Translation:
Although the demons who take possession of the government are dressed like men of government, they do not know the duty of the government. Consequently, by the arrangement of God, such demons, who possess great military strength, fight with one another, and thus the great burden of demons on the surface of the earth is reduced. The demons increase their military power by the will of the Supreme, so that their numbers will be diminished and the devotees will have a chance to advance in Krsna consciousness.

Purport:
As stated in Bhagavad-gita (4.8), paritranaya sadhunam vinasaya ca duskrtam. The sadhus, the devotees of the Lord, are always eager to advance the cause of Krsna consciousness so that the conditioned souls may be released from the bondage of birth and death. But the asuras, the demons, impede the advancement of the Krsna consciousness movement, and therefore Krsna arranges occasional fights between different asuras who are very much interested in increasing their military power. The duty of the government or king is not to increase military power unnecessarily; the real duty of the government is to see that the people of the state advance in Krsna consciousness. For this purpose, Krsna says in Bhagavad-gita (4.13), catur-varnyam maya srstam guna-karma-vibhagasah: "According to the three modes of material nature and the work ascribed to them, the four divisions of human society were created by Me." There should be an ideal class of men who are bona fide brahmanas, and they should be given all protection. Namo brahmanya-devaya go-brahmana-hitaya ca. Krsna is very fond of brahmanas and cows. The brahmanas promulgate the cause of advancement in Krsna consciousness, and the cows give enough milk to maintain the body in the mode of goodness. The ksatriyas and the government should be advised by the brahmanas. Next, the vaisyas should produce enough foodstuffs, and the sudras, who cannot do anything beneficial on their own, should serve the three higher classes (the brahmanas, ksatriyas and vaisyas). This is the arrangement of the Supreme Personality of Godhead so that the conditioned souls will be released from the material condition and return home, back to Godhead. This is the purpose of Krsna's descent on the surface of the earth (paritranaya sadhunam vinasaya ca duskrtam).

Everyone must understand Krsna's activities (janma karma ca me divyam [Bg. 4.9]). If one understands the purpose of Krsna's coming to this earth and performing His activities, one is immediately liberated. This liberation is the purpose of the creation and Krsna's descent upon the surface of the earth. Demons are very much interested in advancing a plan by which people will labor hard like cats, dogs and hogs, but Krsna's devotees want to teach Krsna consciousness so that people will be satisfied with plain living and Krsna conscious advancement. Although demons have created many plans for industry and hard labor so that people will work day and night like animals, this is not the purpose of civilization. Such endeavors are jagato'hitah; that is, they are meant for the misfortune of the people in general. Ksayaya: such activities lead to annihilation. One who understands the purpose of Krsna, the Supreme Personality of Godhead, should seriously understand the importance of the Krsna consciousness movement and seriously take part in it. One should not endeavor for ugra-karma, or unnecessary work for sense gratification. Nunam pramattah kurute vikarma yad indriya-pritaya aprnoti (SB 5.5.4). Simply for sense gratification, people make plans for material happiness. Maya-sukhaya bharam udvahato vimudhan (SB 7.9.43). They do this because they are all vimudhas, rascals. For flickering happiness, people waste their human energy, not understanding the importance of the Krsna consciousness movement but instead accusing the simple devotees of brainwashing. Demons may falsely accuse the preachers of the Krsna consciousness movement, but Krsna will arrange a fight between the demons in which all their military power will be engaged and both parties of demons will be annihilated.
at June 18, 2011