Mother Cow not Just an Animal 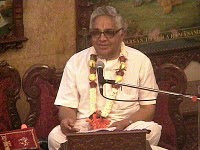 Translation:
Mother earth assumed the form of a cow. Very much distressed, with tears in her eyes, she appeared before Lord Brahma and told him about her misfortune.

Purport:
After Lord Brahma understood the precarious condition of the earth, he first visited the demigods headed by Lord Indra, who are in charge of the various affairs of this universe, and Lord Siva, who is responsible for annihilation. Both maintenance and annihilation go on perpetually, under the order of the Supreme Personality of Godhead. As stated in Bhagavad-gita (4.8), paritranaya sadhunam vinasaya ca duskrtam. Those who are obedient to the laws of God are protected by different servants and demigods, whereas those who are undesirable are vanquished by Lord Siva. Lord Brahma first met all the demigods, including Lord Siva. Then, along with mother earth, they went to the shore of the ocean of milk, where Lord Visnu lies on a white island, Svetadvipa.