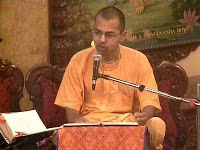 Translation:
After reaching the shore of the ocean of milk, the demigods worshiped the Supreme Personality of Godhead, Lord Visnu, the master of the whole universe, the supreme God of all gods, who provides for everyone and diminishes everyone's suffering. With great attention, they worshiped Lord Visnu, who lies on the ocean of milk, by reciting the Vedic mantras known as the Purusa-sukta.

Purport:
The demigods, such as Lord Brahma, Lord Siva, King Indra, Candra and Surya, are all subordinate to the Supreme Personality of Godhead. Aside from the demigods, even in human society there are many influential personalities supervising various businesses or establishments. Lord Visnu, however, is the God of gods (paramesvara). He is parama-purusa, the Supreme Being, Paramatma. As confirmed in the Brahma-samhita (5.1), isvarah paramah krsnah sac-cid-ananda-vigrahah: "Krsna, known as Govinda, is the supreme controller. He has an eternal, blissful, spiritual body." No one is equal to or greater than the Supreme Personality of Godhead, and therefore He is described here by many words: jagannatha, deva-deva, vrsakapi and purusa. The supremacy of Lord Visnu is also confirmed in Bhagavad-gita (10.12) in this statement by Arjuna:

"You are the Supreme Brahman, the ultimate, the supreme abode and purifier, the Absolute Truth and the eternal divine person. You are the primal God, transcendental and original, and You are the unborn and all-pervading beauty." Krsna is adi-purusa, the original Personality of Godhead (govindam adi-purusam tam aham bhajami). Visnu is a plenary expansion of Lord Krsna, and all the visnu-tattvas are paramesvara, deva-deva.
at July 15, 2011