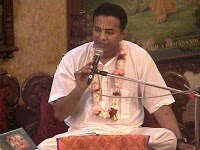 Translation:
In his previous birth, Kamsa had been a great demon named Kalanemi and been killed by Visnu. Upon learning this information from Narada, Kamsa became envious of everyone connected with the Yadu dynasty.

Translation:
Kamsa, the most powerful son of Ugrasena, even imprisoned his own father, the King of the Yadu, Bhoja and Andhaka dynasties, and personally ruled the states known as Surasena.

Purport:
The state known as Mathura was also included within the states known as Surasena.