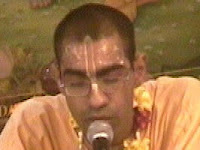 
Translation:
Srila Sukadeva Gosvami continued: Kamsa agreed to the logical arguments of Vasudeva, and, having full faith in Vasudeva's words, he refrained from killing his sister. Vasudeva, being pleased with Kamsa, pacified him further and entered his own house.

Purport:
Although Kamsa was a sinful demon, he believed that Vasudeva would never deviate from his word. The character of a pure devotee like Vasudeva is such that even so great a demon as Kamsa firmly believed in his words and was satisfied. Yasyasti bhaktir bhagavaty akiñcana sarvair gunais tatra samasate surah (SB 5.18.12). All good attributes are present in a devotee, so much so that even Kamsa believed in Vasudeva's words without a doubt.
at August 12, 2011