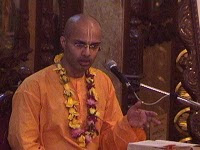 Translation:
Within the womb of Devaki is My partial plenary expansion known as Sankarsana or Sesa. Without difficulty, transfer Him into the womb of Rohini.

Purport:
The first plenary expansion of Krsna is Baladeva, also known as Sesa. The Sesa incarnation of the Supreme Personality of Godhead supports the entire universe, and the eternal mother of this incarnation is mother Rohini. "Because I am going into the womb of Devaki," the Lord told Yogamaya, "the Sesa incarnation has already gone there and made suitable arrangements so that I may live there. Now He should enter the womb of Rohini, His eternal mother."

In this connection, one may ask how the Supreme Personality of Godhead, who is always situated transcendentally, could enter the womb of Devaki, which had previously been entered by the six asuras, the sad-garbhas. Does this mean that the Sad-garbhasuras were equal to the transcendental body of the Supreme Personality of Godhead? The following answer is given by Srila Visvanatha Cakravarti Thakura.

The entire creation, as well as its individual parts, is an expansion of the energy of the Supreme Personality of Godhead. Therefore, even though the Lord enters the material world, He does not do so. This is explained by the Lord Himself in Bhagavad-gita (9.4-5):

"By Me, in My unmanifested form, this entire universe is pervaded. All beings are in Me, but I am not in them. And yet everything that is created does not rest in Me. Behold My mystic opulence! Although I am the maintainer of all living entities, and although I am everywhere, My Self is the very source of creation." Sarvam khalv idam brahma. Everything is an expansion of Brahman, the Supreme Personality of Godhead, yet everything is not the Supreme Godhead, and He is not everywhere. Everything rests upon Him and yet does not rest upon Him. This can be explained only through the acintya-bhedabheda philosophy. Such truths cannot be understood, however, unless one is a pure devotee, for the Lord says in Bhagavad-gita (18.55), bhaktya mam abhijanati yavan yas casmi tattvatah: "One can understand the Supreme Personality as He is only by devotional service." Even though the Lord cannot be understood by ordinary persons, this principle should be understood from the statement of the sastras.

A pure devotee is always transcendentally situated because of executing nine different processes of bhakti-yoga (sravanam kirtanam visnoh smaranam pada-sevanam/ arcanam vandanam dasyam sakhyam atma-nivedanam [SB 7.5.23]). Thus situated in devotional service, a devotee, although in the material world, is not in the material world. Yet a devotee always fears, "Because I am associated with the material world, so many contaminations affect me." Therefore he is always alert in fear, which gradually diminishes his material association.