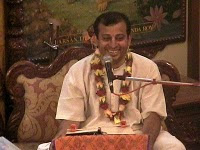 O all-auspicious Yogamaya, I shall then appear with My full six opulences as the son of Devaki, and you will appear as the daughter of mother Yasoda, the queen of Maharaja Nanda.

The word amsa-bhagena is important in this verse. In Bhagavad-gita (10.42) the Lord says:

"But what need is there, Arjuna, for all this detailed knowledge? With a single fragment of Myself I pervade and support this entire universe." Everything is situated as a part of the Supreme Lord's potency. In regard to Lord Krsna's appearance in the womb of Devaki, Brahma played a part also because on the bank of the milk ocean he requested the Supreme Personality of Godhead to appear. A part was also played by Baladeva, the first expansion of Godhead. Similarly, Yogamaya, who appeared as the daughter of mother Yasoda, also played a part. Thus jiva-tattva, visnu-tattva and sakti-tattva are all integrated with the Supreme Personality of Godhead, and when Krsna appears, He appears with all His integrated parts. As explained in previous verses, Yogamaya was requested to attract Sankarsana, Baladeva, from the womb of Devaki to the womb of Rohini, and this was a very heavy task for her. Yogamaya naturally could not see how it was possible for her to attract Sankarsana. Therefore Krsna addressed her as subhe, auspicious, and said, "Be blessed. Take power from Me, and you will be able to do it." By the grace of the Supreme Personality of Godhead, anyone can do anything, for the Lord is present in everything, all things being His parts and parcels (amsa-bhagena) and increasing or decreasing by His supreme will. Balarama was only fifteen days older than Krsna. By the blessings of Krsna, Yogamaya became the daughter of mother Yasoda, but by the supreme will she was not able to enjoy the parental love of her father and mother. Krsna, however, although not actually born from the womb of mother Yasoda, enjoyed the parental love of mother Yasoda and Nanda. By the blessings of Krsna, Yogamaya was able to achieve the reputation of being the daughter of mother Yasoda, who also became famous by the blessings of Krsna. Yasoda means "one who gives fame."