Lord vanquishes all fears of his Devotees 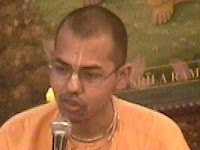 Thus the Supreme Personality of Godhead, who is the Supersoul of all living entities and who vanquishes all the fear of His devotees, entered the mind of Vasudeva in full opulence.

The word visvatma refers to one who is situated in everyone's heart (isvarah sarva-bhutanam hrd-dese 'rjuna tisthati [Bg. 18.61]). Another meaning of visvatma is "the only lovable object for everyone." Because of forgetfulness of this object, people are suffering in this material world, but if one fortunately revives his old consciousness of loving Krsna and connects with Visvatma, one becomes perfect. The Lord is described in the Third Canto (3.2.15) as follows: paravareso mahad-amsa-yukto hy ajo 'pi jato bhagavan. Although unborn, the Lord, the master of everything, appears like a born child by entering the mind of a devotee. The Lord is already there within the mind, and consequently it is not astonishing for Him to appear as if born from a devotee's body. The word avivesa signifies that the Lord appeared within the mind of Vasudeva. There was no need for a discharge of semen. That is the opinion of Sripada Sridhara Svami and Srila Visvanatha Cakravarti Thakura. In the Vaisnava-tosani, Srila Sanatana Gosvami says that consciousness was awakened within the mind of Vasudeva. Srila Viraraghava Acarya also says that Vasudeva was one of the demigods and that within his mind the Supreme Personality of Godhead appeared as an awakening of consciousness.