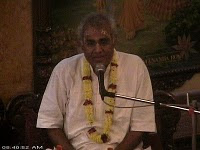 Translation:
While carrying the form of the Supreme Personality of Godhead within the core of his heart, Vasudeva bore the Lord's transcendentally illuminating effulgence, and thus he became as bright as the sun. He was therefore very difficult to see or approach through sensory perception. Indeed, he was unapproachable and unperceivable even for such formidable men as Kamsa, and not only for Kamsa but for all living entities.