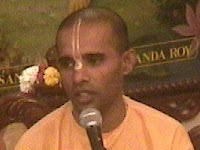 Sukadeva Gosvami said: Deliberating in this way, Kamsa, although determined to continue in enmity toward the Supreme Personality of Godhead, refrained from the vicious killing of his sister. He decided to wait until the Lord was born and then do what was needed.

While sitting on his throne or in his sitting room, while lying on his bed, or, indeed, while situated anywhere, and while eating, sleeping or walking, Kamsa saw only his enemy, the Supreme Lord, Hrsikesa. In other words, by thinking of his all-pervading enemy, Kamsa became unfavorably Krsna conscious.

Although Kamsa was always absorbed in thoughts of Hari, the Supreme Personality of Godhead, he was not happy. A devotee, however, whether sitting on a throne or beneath a tree, is always happy. Srila Rupa Gosvami resigned from office as a government minister to sit beneath a tree, yet he was happy. Tyaktva turnam asesa-mandalapati-srenim sada tucchavat (Sad-gosvamy-astaka 4). He did not care for his comfortable position as minister; he was happy even beneath a tree in Vrndavana, favorably serving the Supreme Personality of Godhead. This is the difference between a devotee and a nondevotee. For a nondevotee, the world is full of problems, whereas for a devotee the entire world is full of happiness.

This comfortable position of a devotee can be established by the mercy of Lord Caitanya Mahaprabhu. Yasmin sthito na duhkhena gurunapi vicalyate (Bg. 6.22). Even when a devotee is superficially put into great difficulty, he is never disturbed.

Translation:
Lord Brahma and Lord Siva, accompanied by great sages like Narada, Devala and Vyasa and by other demigods like Indra, Candra and Varuna, invisibly approached the room of Devaki, where they all joined in offering their respectful obeisances and prayers to please the Supreme Personality of Godhead, who can bestow blessings upon everyone.

Purport:
Dvau bhuta-sargau loke 'smin daiva asura eva ca [Bg. 16.6] (Padma Purana). There are two classes of men—the daivas and the asuras—and there is a great difference between them. Kamsa, being an asura, was always planning how to kill the Supreme Personality of Godhead or His mother, Devaki. Thus he was also Krsna conscious. But devotees are Krsna conscious favorably (visnu-bhaktah smrto daivah). Brahma is so powerful that he is in charge of creating an entire universe, yet he personally came to receive the Supreme Personality of Godhead. Bhava, Lord Siva, is always jubilant in chanting the holy name of the Lord. And what to speak of Narada? Narada-muni, bajaya vina, radhika-ramana-name. Narada Muni is always chanting the glories of the Lord, and his engagement is to travel all over the universe and find a devotee or make someone a devotee. Even a hunter was made a devotee by the grace of Narada. Srila Sanatana Gosvami, in his Tosani, says that the word narada-adibhih means that Narada and the demigods were accompanied by other saintly persons, like Sanaka and Sanatana, all of whom came to congratulate or welcome the Supreme Personality of Godhead. Even though Kamsa was planning to kill Devaki, he too awaited the arrival of the Supreme Personality of Godhead (pratiksams taj janma).