Getting attracted to Krishna's Magic 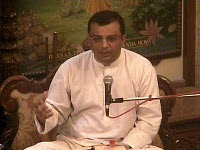 O Supreme Lord, You are not an ordinary living entity appearing in this material world as a result of fruitive activities. Therefore Your appearance or birth in this world has no other cause than Your pleasure potency. Similarly, the living entities, who are part of You, have no cause for miseries like birth, death and old age, except when these living entities are conducted by Your external energy.

As stated in Bhagavad-gita (15.7), mamaivamso jiva-loke jiva-bhutah sanatanah: the living entities are parts and parcels of the Supreme Lord, and thus they are qualitatively one with the Lord. We can understand that when the Supreme Lord appears or disappears as an incarnation, there is no other cause than His pleasure potency. We cannot force the Supreme Personality of Godhead to appear. As He says in Bhagavad-gita (4.7):

"Whenever and wherever there is a decline in religious practice, O descendant of Bharata, and a predominant rise of irreligion—at that time I descend Myself." When there is a need to diminish a burden created by the demons, the Supreme Godhead can do it in many ways because He has multifarious energies. There is no need for Him to come as an incarnation, since He is not forced to do anything like ordinary living entities. The living entities come to this material world in the spirit of enjoyment, but because they want to enjoy without Krsna (krsna-bahirmukha haiya bhoja-vañcha kare), they suffer birth, death, old age and disease under the control of the illusory energy. When the Supreme Personality of Godhead appears, however, no such causes are involved; His descent is an act of His pleasure potency. We should always remember this distinction between the Lord and the ordinary living entity and not uselessly argue that the Lord cannot come. There are philosophers who do not believe in the Lord's incarnation and who ask, "Why should the Supreme Lord come?" But the answer is, "Why should He not come? Why should He be controlled by the desire of the living entity?" The Lord is free to do whatever He likes. Therefore this verse says, vina vinodam bata tarkayamahe. It is only for His pleasure that He comes although He does not need to come.

When the living entities come to this world for material enjoyment, they are entangled in karma and karma-phala by the Lord's illusory energy. But if one seeks shelter at the Lord's lotus feet, one is again situated in his original, liberated state. As stated here, krta yatas tvayy abhayasrayatmani: one who seeks shelter at the lotus feet of the Lord is always fearless. Because we are dependent on the Supreme Personality of Godhead, we should give up the idea that without Krsna we can enjoy freedom in this material world. This idea is the reason we have become entangled. Now it is our duty to seek shelter again at the Lord's lotus feet. This shelter is described as abhaya, or fearless. Since Krsna is not subject to birth, death, old age or disease, and since we are part and parcel of Krsna, we also are not subject to birth, death, old age and disease, but we have become subject to these illusory problems because of our forgetfulness of Krsna and our position as His eternal servants (jivera 'svarupa' haya-krsnera 'nitya-dasa' [Cc. Madhya 20.108]). Therefore, if we practice devotional service by always thinking of the Lord, always glorifying Him and always chanting about Him, as described in text 37 (srnvan grnan samsmarayams ca cintayan), we will be reinstated in our original, constitutional position and thus be saved. The demigods, therefore, encouraged Devaki not to fear Kamsa, but to think of the Supreme Personality of Godhead, who was already within her womb.