The Exalted State of being Ignorant of Krishna's Opulences 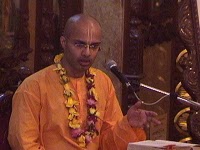 
Translation:
Vasudeva placed the female child on the bed of Devaki, bound his legs with the iron shackles, and thus remained there as before.


Translation:
Exhausted by the labor of childbirth, Yasoda was overwhelmed with sleep and unable to understand what kind of child had been born to her.

Thus end the Bhaktivedanta purports of the Tenth Canto, Third Chapter, of the Srimad-Bhagavatam, entitled "The Birth of Lord Krsna."
at November 23, 2011