We are not the Doers 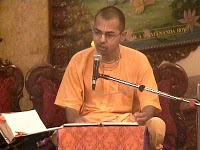 2011-11-24
Srimad Bhagavatam 10.04.01 - We are not the Doers (download mp3)
by Radhika Vallabha Prabhu at ISKCON Chowpatty
www.iskcondesiretree.net


Translation:
Sukadeva Gosvami continued: My dear King Pariksit, the doors inside and outside the house closed as before. Thereafter, the inhabitants of the house, especially the watchmen, heard the crying of the newborn child and thus awakened from their beds.

Purport:
The activities of Yogamaya are distinctly visible in this chapter, in which Devaki and Vasudeva excuse Kamsa for his many devious, atrocious activities and Kamsa becomes repentant and falls at their feet. Before the awakening of the watchmen and the others in the prison house, many other things happened. Krsna was born and transferred to the home of Yasoda in Gokula, the strong doors opened and again closed, and Vasudeva resumed his former condition of being shackled. The watchmen, however, could not understand all this. They awakened only when they heard the crying of the newborn child, Yogamaya.

Srila Visvanatha Cakravarti Thakura has remarked that the watchmen were just like dogs. At night the dogs in the street act like watchmen. If one dog barks, many other dogs immediately follow it by barking. Although the street dogs are not appointed by anyone to act as watchmen, they think they are responsible for protecting the neighborhood, and as soon as someone unknown enters it, they all begin to bark. Both Yogamaya and Mahamaya act in all material activities (prakrteh kriyamanani gunaih karmani sarvasah [Bg. 3.27]), but although the energy of the Supreme Personality of Godhead acts under the Supreme Lord's direction (mayadhyaksena prakrtih suyate sa-caracaram [Bg. 9.10]), doglike watchmen such as politicians and diplomats think that they are protecting their neighborhoods from the dangers of the outside world. These are the actions of maya. But one who surrenders to Krsna is relieved of the protection afforded by the dogs and doglike guardians of this material world.
at November 24, 2011