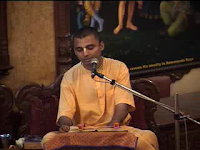 Translation:
My Lord, because You dispel all the fear of Your devotees, I request You to save us and give us protection from the terrible fear of Kamsa. Your form as Visnu, the Supreme Personality of Godhead, is appreciated by yogis in meditation. Please make this form invisible to those who see with material eyes.

Purport:
The word dhyana-dhisnyam is significant in this verse because the form of Lord Visnu is meditated upon by yogis (dhyanavasthita-tad-gatena manasa pasyanti yam yoginah [SB 12.13.1]). Devaki requested the Lord, who had appeared as Visnu, to conceal that form, for she wanted to see the Lord as an ordinary child, like a child appreciated by persons who have material eyes. Devaki wanted to see whether the Supreme Personality of Godhead had factually appeared or she was dreaming the Visnu form. If Kamsa were to come, she thought, upon seeing the Visnu form he would immediately kill the child, but if he saw a human child, he might reconsider. Devaki was afraid of Ugrasena-atmaja; that is, she was afraid not of Ugrasena and his men, but of the son of Ugrasena. Thus she requested the Lord to dissipate that fear, since He is always ready to give protection (abhayam) to His devotees. "My Lord," she prayed, "I request You to save me from the cruel hands of the son of Ugrasena, Kamsa. I am praying to Your Lordship to please rescue me from this fearful condition because You are always ready to give protection to Your servitors." The Lord has confirmed this statement in the Bhagavad-gita by assuring Arjuna, "You may declare to the world, My devotee shall never be vanquished."

While thus praying to the Lord for rescue, mother Devaki expressed her motherly affection: "I understand that this transcendental form is generally perceived in meditation by the great sages, but I am still afraid because as soon as Kamsa understands that You have appeared, he might harm You. So I request that for the time being You become invisible to our material eyes." In other words, she requested the Lord to assume the form of an ordinary child. "My only cause of fear from my brother Kamsa is due to Your appearance. My Lord Madhusudana, Kamsa may know that You are already born. Therefore I request You to conceal this four-armed form of Your Lordship, which holds the four symbols of Visnu-namely the conchshell, the disc, the club and the lotus flower. My dear Lord, at the end of the annihilation of the cosmic manifestation, You put the whole universe within Your abdomen; still, by Your unalloyed mercy, You have appeared in my womb. I am surprised that You imitate the activities of ordinary human beings just to please Your devotee."

Devaki was so afraid of Kamsa that she could not believe that Kamsa would be unable to kill Lord Visnu, who was personally present. Out of motherly affection, therefore, she requested the Supreme Personality of Godhead to disappear. Although because of the Lord's disappearance Kamsa would harass her more and more, thinking that the child born of her was hidden somewhere, she did not want the transcendental child to be harassed and killed. Therefore she requested Lord Visnu to disappear. Later, when harassed, she would think of Him within her mind.
at November 02, 2011