Upholding Spirit of Devotion in the Face of Sociopolitical Upheavals 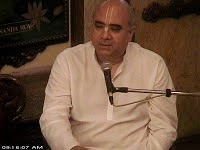 
Translation:
[Turning to Rukmini, Balarama continued:] The code of sacred duty for warriors established by Lord Brahma enjoins that one may have to kill even his own brother. That is indeed a most dreadful law.

Purport:
Lord Balarama, in the interest of fairness, is giving a complete analysis of the situation. Although one should not kill a relative, there are extenuating circumstances according to military codes. In the American Civil War, which took place in the 1860s, many families were divided between the army of the North and that of the South, and thus fratricidal killing unfortunately became a common affair. Such killing is certainly ghoratama, most dreadful. Yet such is the nature of the material world, where duty, honor and so-called justice often create conflict. Only on the spiritual platform, in pure Krsna consciousness, can we transcend the unacceptable pain of material existence. Rukmi was maddened by pride and envy and thus could not understand anything about Krsna or Krsna consciousness.
at December 28, 2014