Krishna Is The Best Person 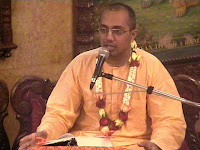 O King of the earth, it has been decided by expert, learned scholars that only the Supreme Personality of Godhead, Krsna, in whom all that is moving or nonmoving within this universe is resting and from whom everything is coming, is the best person to whom everything must be given.

Whenever we perform some religious act in terms of dharma, artha, kama and moksa, we must perform it according to the time, place and person (kala, desa, patra). Narada Muni has already described the desa (place) and kala (time). The kala has been described in verses twenty through twenty-four, beginning with the words ayane visuve kuryad vyatipate dina-ksaye. And the places for giving charity or performing ritualistic ceremonies have been described in verses thirty through thirty-three, beginning with saramsi puskaradini ksetrany arhasritany uta. Now, to whom everything must be given is decided in this verse. Harir evaika urvisa yan-mayam vai caracaram. The Supreme Personality of Godhead, Krsna, is the root of everything, and therefore He is the best patra, or person, to whom everything must be given. In Bhagavad-gita (5.29) it is said:

If one wants to enjoy real peace and prosperity, he should give everything to Krsna, who is the real enjoyer, real friend and real proprietor. It is therefore said:

By worshiping or satisfying Acyuta, the Supreme Personality of Godhead, Krsna, one can satisfy everyone, just as one can water the branches, leaves and flowers of a tree simply by watering its root or as one satisfies all the senses of the body by giving food to the stomach. Therefore, a devotee simply offers everything to the Supreme Personality of Godhead to receive the best results of charity, religious performances, sense gratification and even liberation (dharma, artha, kama, moksa [SB 4.8.41, Cc. Adi 1.90]).