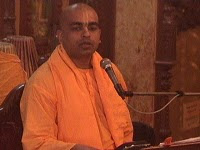 Herein we find the history of the Bhagavad-gita traced from a remote time when it was delivered to the royal order of all planets, beginning from the sun planet. The kings of all planets are especially meant for the protection of the inhabitants, and therefore the royal order should understand the science of Bhagavad-gita in order to be able to rule the citizens and protect them from material bondage to lust. Human life is meant for cultivation of spiritual knowledge, in eternal relationship with the Supreme Personality of Godhead, and the executive heads of all states and all planets are obliged to impart this lesson to the citizens by education, culture and devotion. In other words, the executive heads of all states are intended to spread the science of Krsna consciousness so that the people may take advantage of this great science and pursue a successful path, utilizing the opportunity of the human form of life.

In this millennium, the sun-god is known as Vivasvan, the king of the sun, which is the origin of all planets within the solar system. In the Brahma-samhita (5.52) it is stated:

"Let me worship," Lord Brahma said, "the Supreme Personality of Godhead, Govinda [Krsna], who is the original person and under whose order the sun, which is the king of all planets, is assuming immense power and heat. The sun represents the eye of the Lord and traverses its orbit in obedience to His order."

The sun is the king of the planets, and the sun-god (at present of the name Vivasvan) rules the sun planet, which is controlling all other planets by supplying heat and light. He is rotating under the order of Krsna, and Lord Krsna originally made Vivasvan His first disciple to understand the science of Bhagavad-gita. The Gita is not, therefore, a speculative treatise for the insignificant mundane scholar but is a standard book of knowledge coming down from time immemorial.

In the Mahabharata (Santi-parva 348.51-52) we can trace out the history of the Gita as follows:

"In the beginning of the millennium known as Treta-yuga this science of the relationship with the Supreme was delivered by Vivasvan to Manu. Manu, being the father of mankind, gave it to his son Maharaja Iksvaku, the king of this earth planet and forefather of the Raghu dynasty, in which Lord Ramacandra appeared. Therefore, Bhagavad-gita existed in human society from the time of Maharaja Iksvaku."

At the present moment we have just passed through five thousand years of the Kali-yuga, which lasts 432,000 years. Before this there was Dvapara-yuga (800,000 years), and before that there was Treta-yuga (1,200,000 years). Thus, some 2,005,000 years ago, Manu spoke the Bhagavad-gita to his disciple and son Maharaja Iksvaku, the king of this planet earth. The age of the current Manu is calculated to last some 305,300,000 years, of which 120,400,000 have passed. Accepting that before the birth of Manu the Gita was spoken by the Lord to His disciple the sun-god Vivasvan, a rough estimate is that the Gita was spoken at least 120,400,000 years ago; and in human society it has been extant for two million years. It was respoken by the Lord again to Arjuna about five thousand years ago. That is the rough estimate of the history of the Gita, according to the Gita itself and according to the version of the speaker, Lord Sri Krsna. It was spoken to the sun-god Vivasvan because he is also a ksatriya and is the father of all ksatriyas who are descendants of the sun-god, or the surya-vamsa ksatriyas. Because Bhagavad-gita is as good as the Vedas, being spoken by the Supreme Personality of Godhead, this knowledge is apauruseya, superhuman. Since the Vedic instructions are accepted as they are, without human interpretation, the Gita must therefore be accepted without mundane interpretation. The mundane wranglers may speculate on the Gita in their own ways, but that is not Bhagavad-gita as it is. Therefore, Bhagavad-gita has to be accepted as it is, from the disciplic succession, and it is described herein that the Lord spoke to the sun-god, the sun-god spoke to his son Manu and Manu spoke to his son Iksvaku.

This supreme science was thus received through the chain of disciplic succession, and the saintly kings understood it in that way. But in course of time the succession was broken, and therefore the science as it is appears to be lost.

It is clearly stated that the Gita was especially meant for the saintly kings because they were to execute its purpose in ruling over the citizens. Certainly Bhagavad-gita was never meant for the demonic persons, who would dissipate its value for no one's benefit and would devise all types of interpretations according to personal whims. As soon as the original purpose was scattered by the motives of the unscrupulous commentators, there arose the need to reestablish the disciplic succession. Five thousand years ago it was detected by the Lord Himself that the disciplic succession was broken, and therefore He declared that the purpose of the Gita appeared to be lost. In the same way, at the present moment also there are so many editions of the Gita (especially in English), but almost all of them are not according to authorized disciplic succession. There are innumerable interpretations rendered by different mundane scholars, but almost all of them do not accept the Supreme Personality of Godhead, Krsna, although they make a good business on the words of Sri Krsna. This spirit is demonic, because demons do not believe in God but simply enjoy the property of the Supreme. Since there is a great need of an edition of the Gita in English, as it is received by the parampara (disciplic succession) system, an attempt is made herewith to fulfill this great want. Bhagavad-gita—accepted as it is—is a great boon to humanity; but if it is accepted as a treatise of philosophical speculations, it is simply a waste of time.