Qualifications Of A Monarch 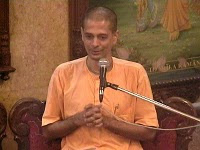 
Translation:
My dear King Pariksit, your father, Abhimanyu, was born from the womb of Subhadra as the son of Arjuna. He was the conqueror of all atirathas [those who could fight with one thousand charioteers]. From him, by the womb of Uttara, the daughter of Viradraja, you were born.


Translation:
After the Kuru dynasty was annihilated in the Battle of Kuruksetra, you also were about to be destroyed by the brahmastra atomic weapon released by the son of Dronacarya, but by the mercy of the Supreme Personality of Godhead, Krsna, you were saved from death.


Translation:
My dear King, your four sons Janamejaya, Srutasena, Bhimasena and Ugrasena are very powerful. Janamejaya is the eldest.

Translation:
Because of your death by the Taksaka snake, your son Janamejaya will be very angry and will perform a sacrifice to kill all the snakes in the world.


Translation:
After conquering throughout the world and after accepting Tura, the son of Kalasa, as his priest, Janamejaya will perform asvamedha-yajñas, for which he will be known as Turaga-medhasat.


Translation:
The son of Janamejaya known as Satanika will learn from Yajñavalkya the three Vedas and the art of performing ritualistic ceremonies. He will also learn the military art from Krpacarya and the transcendental science from the sage Saunaka.


Translation:
When the town of Hastinapura [New Delhi] is inundated by the river, Nemicakra will live in the place known as Kausambi. His son will be celebrated as Citraratha, and the son of Citraratha will be Suciratha.


Translation:
From Suciratha will come the son named Vrstiman, and his son, Susena, will be the emperor of the entire world. The son of Susena will be Sunitha, his son will be Nrcaksu, and from Nrcaksu will come a son named Sukhinala.

Translation:
The son of Sukhinala will be Pariplava, and his son will be Sunaya. From Sunaya will come a son named Medhavi; from Medhavi, Nrpañjaya; from Nrpañjaya, Durva; and from Durva, Timi.


Translation:
The son of Mahinara will be Dandapani, and his son will be Nimi, from whom King Ksemaka will be born. I have now described to you the moon-god's dynasty, which is the source of brahmanas and ksatriyas and is worshiped by demigods and great saints. In this Kali-yuga, Ksemaka will be the last monarch. Now I shall describe to you the future of the Magadha dynasty. Please listen.


Translation:
From Subala will come Sunitha; from Sunitha, Satyajit; from Satyajit, Visvajit; and from Visvajit, Ripuñjaya. All of these personalities will belong to the dynasty of Brhadratha, which will rule the world for one thousand years.

Purport:
This is the history of a monarchy that began with Jarasandha and continues for one thousand years as the above-mentioned kings appear on the surface of the globe.

Thus end the Bhaktivedanta purports of the Ninth Canto, Twenty-second Chapter, of the Srimad-Bhagavatam, entitled "The Descendants of Ajamidha."