Krishna Katha is Bhavaushadi for All 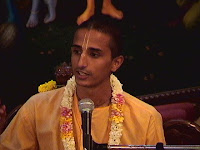 
Translation:
While in trance, Lord Brahma heard the words of Lord Visnu vibrating in the sky. Thus he told the demigods: O demigods, hear from me the order of Ksirodakasayi Visnu, the Supreme Person, and execute it attentively without delay.

Purport:
It appears that the words of the Supreme Personality of Godhead can be heard in trance by competent persons. Modern science gives us telephones, by which one can hear sound vibrations from a distant place. Similarly, although other persons cannot hear the words of Lord Visnu, Lord Brahma is able to hear the Lord's words within himself. This is confirmed in the beginning of Srimad-Bhagavatam (1.1.1): tene brahma hrda ya adi-kavaye. Adi-kavi is Lord Brahma. In the beginning of the creation, Lord Brahma received the instructions of Vedic knowledge from Lord Visnu through the medium of the heart (hrda). The same principle is confirmed herewith. While Brahma was in trance, he was able to hear the words of Ksirodakasayi Visnu, and he carried the Lord's message to the demigods. Similarly, in the beginning, Brahma first received the Vedic knowledge from the Supreme Personality of Godhead through the core of the heart. In both instances the same process was used in transmitting the message to Lord Brahma. In other words, although Lord Visnu was invisible even to Lord Brahma, Lord Brahma could hear Lord Visnu's words through the heart. The Supreme Personality of Godhead is invisible even to Lord Brahma, yet He descends on this earth and becomes visible to people in general. This is certainly an act of His causeless mercy, but fools and nondevotees think that Krsna is an ordinary historical person. Because they think that the Lord is an ordinary person like them, they are described as mudha (avajananti mam mudhah [Bg. 9.11]). The causeless mercy of the Supreme Personality of Godhead is neglected by such demoniac persons, who cannot understand the instructions of Bhagavad-gita and who therefore misinterpret them.
at July 16, 2011