Nature of Individual Self 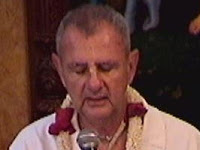 
Translation:
One who considers his visible body, which is a product of the three modes of nature, to be independent of the soul is unaware of the basis of existence, and therefore he is a rascal. Those who are learned have rejected his conclusion because one can understand through full discussion that with no basis in soul, the visible body and senses would be insubstantial. Nonetheless, although his conclusion has been rejected, a foolish person considers it a reality.

Purport:
Without the basic principle of soul, the body cannot be produced. So-called scientists have tried in many ways to produce a living body in their chemical laboratories, but no one has been able to do it because unless the spirit soul is present, a body cannot be prepared from material elements. Since scientists are now enamored of theories about the chemical composition of the body, we have challenged many scientists to make even a small egg. The chemicals in eggs can be found very easily. There is a white substance and a yellow substance, covered by a shell, and modern scientists should very easily be able to duplicate all this. But even if they were to prepare such an egg and put it in an incubator, this man-made chemical egg would not produce a chicken. The soul must be added because there is no question of a chemical combination for life. Those who think that life can exist without the soul have therefore been described here as abudhah, foolish rascals.

"Earth, water, fire, air, ether, mind, intelligence and false ego—all together these eight comprise My separated material energies. But besides this inferior nature, O mighty-armed Arjuna, there is a superior energy of Mine, which consists of all living entities who are struggling with material nature and are sustaining the universe."

The body, therefore, has a relationship with the Supreme Personality of Godhead, just as the soul does. Since both of them are energies of the Lord, neither of them is false, because they come from the reality. One who does not know this secret of life is described as abudhah. According to the Vedic injunctions, aitadatmyam idam sarvam, sarvam khalv idam brahma: everything is the Supreme Brahman. Therefore, both the body and the soul are Brahman, since matter and spirit emanate from Brahman.

Not knowing the conclusions of the Vedas, some people accept the material nature as substance, and others accept the spirit soul as substance, but actually Brahman is the substance. Brahman is the cause of all causes. The ingredients and the immediate cause of this manifested material world are Brahman, and we cannot make the ingredients of this world independent of Brahman. Furthermore, since the ingredients and the immediate cause of this material manifestation are Brahman, both of them are truth, satya; there is no validity to the expression brahma satyam jagan mithya. The world is not false.

Jñanis reject this world, and foolish persons accept this world as reality, and in this way they are both misguided. Although the body is not as important as the soul, we cannot say that it is false. Yet the body is temporary, and only foolish, materialistic persons, who do not have full knowledge of the soul, regard the temporary body as reality and engage in decorating this body. Both of these pitfalls—rejection of the body as false and acceptance of the body as all in all—can be avoided when one is fully situated in Krsna consciousness. If we regard this world as false, we fall into the category of asuras, who say that this world is unreal, with no foundation and no God in control (asatyam apratistham te jagad ahur anisvaram). As described in the Sixteenth Chapter of Bhagavad-gita, this is the conclusion of demons.
at October 21, 2011