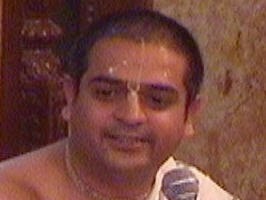 Translation:
With the sound of His conchshell Lord Gadadhara then shattered the magic seals of the fortress, along with the hearts of its brave defenders, and with His heavy club He demolished the surrounding earthen ramparts.

Translation:
The five-headed demon Mura, who slept at the bottom of the city’s moat, awoke and rose up out of the water when he heard the vibration of Lord Krsna’s Pañcajanya conchshell, a sound as terrifying as the thunder at the end of the cosmic age.

Translation:
Shining with the blinding, terrible effulgence of the sun’s fire at the end of a millennium, Mura seemed to be swallowing up the three worlds with his five mouths. He lifted up his trident and fell upon Garuda, the son of Tarksya, like an attacking snake.

Translation:
Mura whirled his trident and then hurled it fiercely at Garuda, roaring from all five mouths. The sound filled the earth and sky, all directions and the limits of outer space, until it reverberated against the very shell of the universe.

Translation:
Then with two arrows Lord Hari struck the trident flying toward Garuda and broke it into three pieces. Next the Lord hit Mura’s faces with several arrows, and the demon angrily hurled his club at the Lord.

Translation:
As Mura’s club sped toward Him on the battlefield, Lord Gadagraja intercepted it with His own and broke it into thousands of pieces. Mura then raised his arms high and rushed at the unconquerable Lord, who easily sliced off his heads with His disc weapon.

Translation:
Lifeless, Mura’s decapitated body fell into the water like a mountain whose peak has been severed by the power of Lord Indra’s thunderbolt. The demon’s seven sons, enraged by their father’s death, prepared to retaliate.

Translation:
These fierce warriors furiously attacked invincible Lord Krsna with arrows, swords, clubs, spears, lances and tridents, but the Supreme Lord, with unfailing prowess, cut this mountain of weapons into tiny pieces with His arrows.

Translation:
The Lord severed the heads, thighs, arms, legs and armor of these opponents led by Pitha and sent them all to the abode of Yamaraja. Narakasura, the son of the earth, could not contain his fury when he saw the fate of his military leaders. Thus he went out of the citadel with elephants born from the Milk Ocean who were exuding mada from their foreheads out of excitement.

Translation:
Lord Krsna and His wife, mounted upon Garuda, looked like a cloud with lightning sitting above the sun. Seeing the Lord, Bhauma released his Sataghni weapon at Him, whereupon all of Bhauma’s soldiers simultaneously attacked with their weapons.

Translation:
At that moment Lord Gadagraja shot His sharp arrows at Bhaumasura’s army. These arrows, displaying variegated feathers, soon reduced that army to a mass of bodies with severed arms, thighs and necks. The Lord similarly killed the opposing horses and elephants.

Translation:
Lord Hari then struck down all the missiles and weapons the enemy soldiers threw at Him, O hero of the Kurus, destroying each and every one with three sharp arrows. Meanwhile Garuda, as he carried the Lord, struck the enemy’s elephants with his wings. Beaten by Garuda’s wings, beak and talons, the elephants fled back into the city, leaving Narakasura alone on the battlefield to oppose Krsna.

Translation:
Seeing his army driven back and tormented by Garuda, Bhauma attacked him with his spear, which had once defeated Lord Indra’s thunderbolt. But though struck by that mighty weapon, Garuda was not shaken. Indeed, he was like an elephant hit with a flower garland.

Translation:
Bhauma, frustrated in all his attempts, took up his trident to kill Lord Krsna. But even before he could release it, the Lord cut off his head with His razor-sharp cakra as the demon sat atop his elephant.

Purport:
According to Srila Visvanatha Cakravarti, as Bhauma raised his invincible trident, Satyabhama, sitting on Garuda with the Lord, said to Krsna, “Kill him right away,” and Krsna did just that.